I briefly discussed this high-speed rail in a previous post, however, it seems that when I made that post I was lacking quite a bit of very interesting information. So, I thought I’d dig a bit more and gather more information so you folks (if interested) can get a deeper insight — so let’s get into this new post!

When was this first proposed?

Although it’s recently come back into the media because of our current PM Anthony Albanese announcing a major move in making the high-speed rail happen, it was actually already planned out with routes, stations, speeds, time and cost estimates all the way back in a 2013 Report, with it later being picked up by Infrastructure Australia in 2017, which I’ll be discussing in this post.

How high-speed is “high-speed”?

Its speed is proposed at being “exceeding 250kph” with the maximum speed being 350kph and the operational speed varying on the service. Compared to some of the fastest trains in the world it’s not really that fast, however considering the length of time interstate trains take currently I find myself pretty enthusiastic about the possible travel time reduction (Further details below)

Where will the HSR go?

As its name suggests, it is meant to connect cities along the East Coast of Australia, including the capital cities Melbourne, Canberra, Sydney and Brisbane. According to the 2013 report it would feature 1,748 of new tracks connecting the four cities mentioned, as well as 12 regional cities (Further details below).

How much will it cost?

According to the 2013 Report, this project would cost up to AUD$114 billion (2012 AUD) which adjusted for inflation is around $139 billion today. A lot of money, basically.

Not, great. Lmao. Right now it currently takes approx. 13-15 hours between Melbourne and Canberra, 4 hours between Canberra and Sydney, then 14 hours between Sydney and Brisbane. A pretty long damn time. Even with intercity trains it’s still fairly long, e.g. Sydney to Newcastle is longer than the equivalent car journey at around 2.5 hours.

What connections is the current interstate rail missing?

Trains from Melbourne have to stop at Goulburn because the intersection does not allow turning into Canberra. 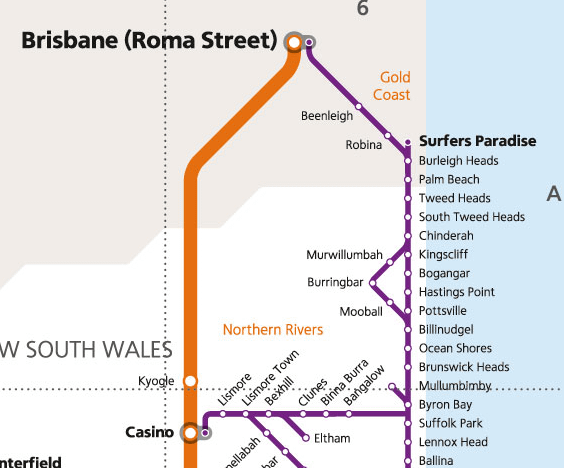 The only existing interstate connection is by Coach, rather than by train.

As shown on the map below, the East Coast HSR’s proposed route is very similar to the already existing interstate rail, however as you can see it now has corrected railways to allow for direct linkages between Melbourne and Canberra, and into the Gold Coast. It has much less stops compared to the full interstate, and perhaps this is simply to accommodate maximising speed of the HSR. 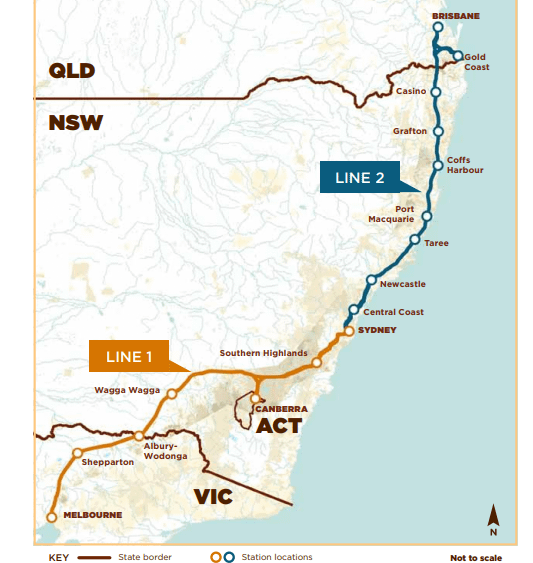 So as mentioned earlier, the current interstate journeys can be up to 15 hours! So how long would it take (theoretically) under the proposed HSR? Well, according to the 2013 Report it will be cut down to just a few hours, and sometimes not even! 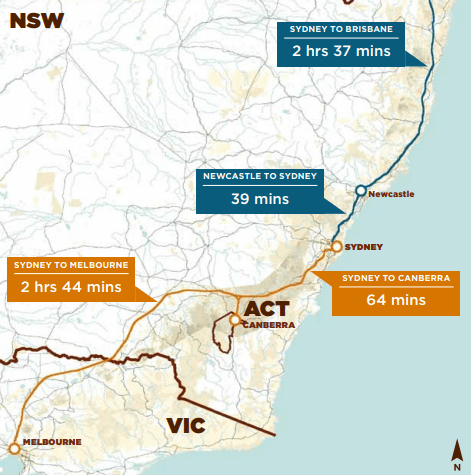 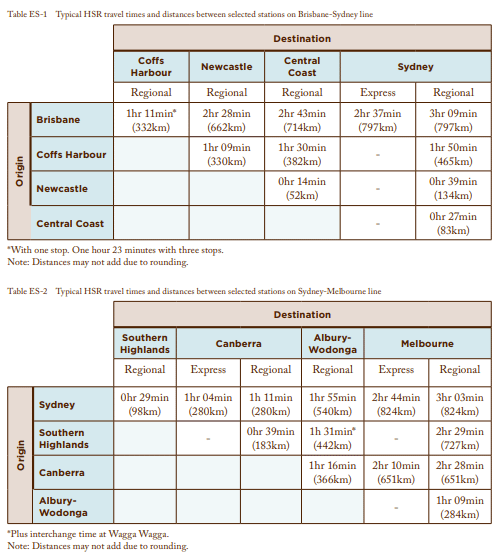 So, what’s happening? What’s the timeframe?

As aforementioned, this proposal goes all the way back to 2013 and has been on hold since. However, in April 2022 the National Faster Rail Agency released a report confirming brand new and billion-dollar investments into the proposal (alongside other railway projects). The Prime Minister also recently put forward a bill for the establishment of a High-Speed Rail Authority to be an independent agency overlooking the East Coast Rail’s future construction.

The original 2013 Report projects the completion of the HSR as going into 2065 which is a long-ass time, and as a comment has pointed out, there has been an external study finding that the HSR could be built for cheaper and in under 10 years. You can check out that report here.

What do you think?

Discuss in the replies below. :] !

Would the study mentioned actually yield significant saving if adopted by more cities?